The National Black Church Initiative (NBCI), a faith-based coalition of 34, 000 churches comprised of 15 denominations and 15.7 million African Americans dedicated to the eradication of racial disparities around the world is urging all religious communities to join together in the promotion of peace. Our Black leadership partners - 66,000 churches nationwide – are called upon to use the full force of our combined 100,000 churches to draw attention to the problem of global warming, the concept of which the Black church has accepted for over 20 years.

We intend to use the full weight of our collective wealth and political might both domestically and globally to bring attention to this problem. Consequently, the National Black Church Initiative is crafting a long term environmental policy to offer strategic direction to our members and church congregants. By June 2012, we plan to offer written guidelines on creating green and energy efficient worship buildings.

The Rev. Anthony Evans, President of NBCI says "There are two major reasons that we have launched a formal environmental justice initiative. Firstly, God is calling upon the Black church to use its vast power to get out front on these issues. Secondly, we are driven by the life and legacy of Damu Smith, who spent his life preaching and teaching about environmental justice. Damu was not only an activist but an ordained minister who taught that we need to make sure not to forget that we need to sustain God's immaculate creation."

The Black church believes that it is imperative that it is in the forefront in implementing environmental policy in the faith community and in offering its perspective on environmental policy both domestically and globally. The mission of this initiative is for the NBCI to utilize its enormous moral authority and influence to support policies and programs to educate our congregants on the importance of the environment as it relates to their faith and to preserve the environment for all future generations.

We plan to work with the influential Group of Ten environmental organizations—Defenders of Wildlife, Environmental Defense Fund, National Audubon Society, National Wildlife Federation, National Resources Defense Council, Friends of the Earth, Izaak Walton League, Sierra Club, the Wilderness Society and the World Wide Fund for Nature-- to bring about this reality. We also are committed to combating the scourge of environmental racism and creating green, sustainable environments throughout our faith-based communities across the country. We place a special emphasis on teaching our children the theological tenets of our faith regarding protecting and preserving the environment. Whenever there are issues salient to the Black church, we will work with others. When there are affinity issues of like-mindedness, we will work with others on an issue by issue basis. 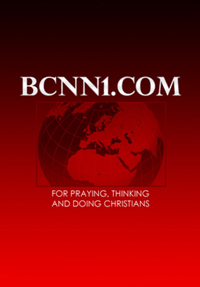 We are here on earth not to exploit and destroy God's creation but to be stewards of the environmental bounty that we have been given. That is the crux of the disagreement between climate change deniers and environmentalists. As we see it, to live in harmony with nature is to live in harmony with God. For climate change skeptics, to acknowledge the harm that we have been doing to the environment as dramatically evidenced by heat waves, powerful hurricanes, and massive floods is to be confronted with the imperative of changing how we relate to one another through our engagement with the environment. For over 20 years, the NBCI has acknowledged the existence of global warming and understood that how we interact with the environment reflects our character as human beings. In this way, the NBCI Environment Initiative is a gateway to fighting for many issues that are of moral, political and economic significance to our members and the nation as whole.

The NBCI Environmental Initiative is a gateway to fighting for these issues while deploying the power of over 15.7 million people. During this time of economic crisis, many churches are searching for ways to save money by reducing skyrocketing energy costs. Switching from carbon-intensive fuels such as oil as an energy source for their buildings to renewable energy resources is therefore a way of not only helping to ameliorate environmental conditions but also a way to save money. Technologies such as solar that were not cost competitive against oil and coal are now not only competitive but offer superior savings. An added benefit for the NBCI is that many of its members are located in the South where there is the geographical advantage of ample sunlight to power our worship centers. This therefore positions us to take a leadership role in the burgeoning field of sustainable building design and green retrofitting, an endeavor that offers the additional advantage of creating much needed jobs in our beleaguered communities.

For example, Washington, DC's Florida Avenue Baptist Church, a 500 member congregation that is a sister church of the NBCI, had 44 solar panels installed in March 2011. This $60,000 investment has already reduced its $3,000 monthly electricity bill by $450 (15%) with additional adjustments planned that could enable solar to produce 25% of its electricity. It is important to note that federal subsidies and local incentives helped them to raise 30% ($18,000) of the required funding and a U.S. Department of Labor grant enabled the local solar firm to train and hire 80 workers to do the construction and retrofitting. Thus, mobilizing politically to make solar energy and environmental issues generally a policy priority can have a palpable financial and economic development impact. This is also a means of creating green jobs in an African American community where the unemployment rate is 17%. The quest for economic justice has long been at the core of the NBCI. The problems of environmental degradation, global warming and climate change highlight the fact that increasingly the American economy only serves a small segment of the American populace while the majority are left to deal with the environmental and economic consequences of decisions made by a tiny corporate elite. We need to democratize this economy so that it serves everyone which in essence is what sustainability truly entails.

The hurricane that swept away New Orleans was not solely a natural disaster. The incredible strength of Hurricane Katrina, and the myriad other hurricanes since, was a consequence of the man-made warming of the air by the introduction of heat and energy producing fossil fuels into the atmosphere. The erosion of the wetlands and other coastal resources that could have acted as a natural barrier to mitigate the flooding was the direct result of unrestrained commercial development along the Gulf. Likewise, skyrocketing cancer rates, particularly within the Black community, are the result of the dumping of toxic chemicals into the environment and the deleterious impact that that has on the food, water, and air that we ingest. Mother Nature is responding to the incessant attacks upon her with a fury that is unmatched.

Economic justice goes hand in hand with environmental justice especially given the deleterious impact of environmental racism upon the Black community. It is for that reason that NBCI is a part of the National Black Environmental Justice Network which is a national preventive health and environmental/economic justice network with affiliates in 33 states and the District of Columbia. Its mission is to enable African Americans to secure environmental and economic justice, health equity, political, power, and civil rights and human rights by mobilizing for The NBCI shares that mission and will be working to realize its aims.

The National Black Environmental Justice Network was led by the late activist Damu Smith until his death from colon cancer in 2006. Mr. Smith worked with poor, predominantly African American communities in Louisiana to speak out against chemical industry pollution and government support of these industries. As he noted: "You want to know why I'm so passionate about my work? I've just seen so much suffering around the world....And you know, if it takes the last breath out of my body, I'm going to use my mouth to speak on behalf of those who are voiceless, and use my mind to provide whatever wisdom and experience I have to train young people and train others to be more effective about how we can organize and stop these problems.'"

The Black church is taking up Damu Smith's vision and will work to make it a reality.

Reverend Evans has been recognized by Aetna Health Insurance company as an individual moving health and wellness messages to the forefront. 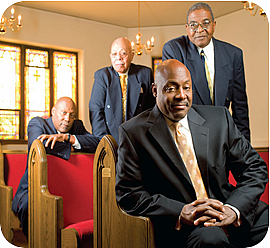 This calendar celebrates remarkable individuals who have dedicated their lives to inspiring and empowering others to spend time taking care of their minds, bodies and spirit. 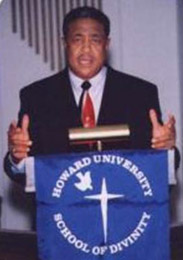 As Professor of Biblical Studies at Howard U. School of Divinity and Chair for the Biblical Inst. for Social Change, Inc, I am proud to be part of the leadership team of the National Black Church Initiative headed by my former student Rev. Anthony Evans. I have worked closely with Brother Evans in his capacity as NBCI's President and observed close up his engagement of many difficult social issues that have come to challenge the ministry of African American churches across our Nation.

The Black Church - Standing Up for Christ 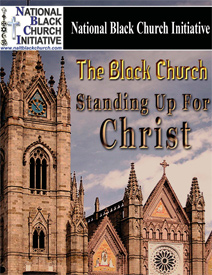 The Black Church - Strength of the Black Community 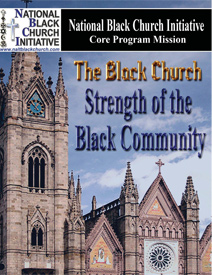